Stackflo is a privately owned company whose history runs from the early days of automation. 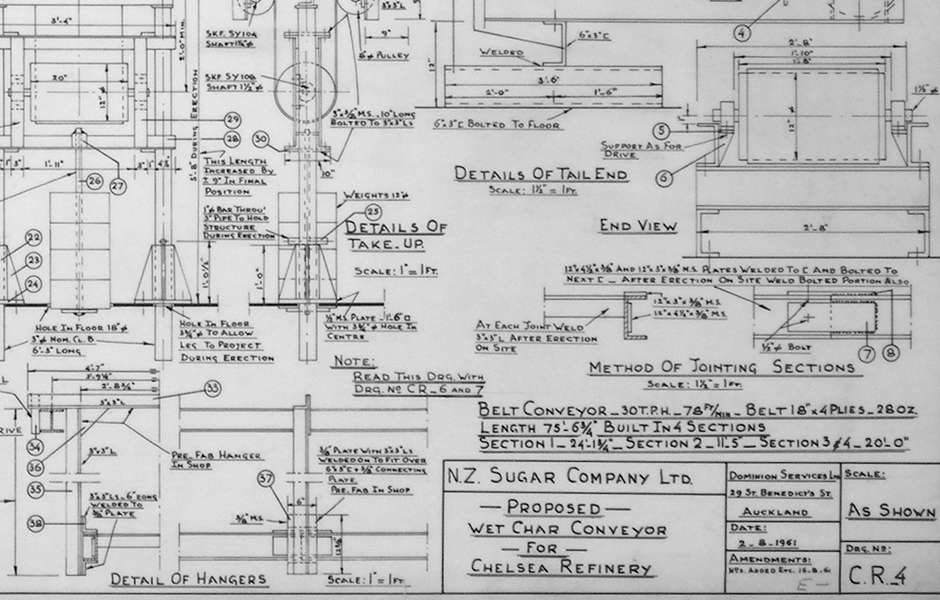 The business has been in continual operation since 1952, taking an entrepreneur’s approach in order to lead the way in materials handling, automation and now robotics, mainly focused on the food industry.

After World War II, a group of servicemen came together to create Dominion Services Ltd. One of those men was Roy Russell Baker, father of the present day Managing Director of Stackflo, John Baker. Roy returned from service in North Africa, Italy and Japan and worked with his colleagues to build simple machinery for automation, such as conveyors.

As time passed, the group became specialists in automation for the meat industry. Roy spent many months on the road, working door to door selling a head splitting device to meatworks operators. As a child, John was called on to make tea and sweep floors, and also to squeeze behind machinery to reach parts mislaid in spaces no grown man could wriggle into. We can only imagine the renderings he encountered in these places!

In the 1970s, the company suffered from a downturn in meat volumes resulting from Britain’s entry into the EEC. The team diversified into gantry cranes. They designed, built and installed their gantries into many Auckland factories, including the New Zealand Herald printing works.

Meanwhile, John finished his education and completed an ME Mech, specialising in control theory and vibration. After a stint at the Mines Department he joined the NZ Electricity Dept, where he developed software to resolve performance problems at the Otahuhu Gas Fired Power Station,

Then he joined his father at work where, in 1987, he began to develop solutions using mechanisation in palletising. In 1994, the existing management team bought out the cranes business and John’s focus turned fully to robotics.

Throughout the 1990s, Robotic Palletisers dominated. The company’s industrial palletising robot held 60% of the Australasian market. In 1998 they were proud winners of the Best Design Award (Capital Goods) and second overall only to Fisher & Paykel’s iconic dish drawer.

This year John also became aware of a new opportunity - the need for robotic handling of milk crates. Seeing the potential for a technically successful and commercially viable solution, Robotic Palletisers was sold and the core team set about 9 years of research and development work. John invested heavily in intellectual property to create a solution that is unique to the market. In 2004 the first demonstration crate picker was up and running and by 2007 the team had developed a proposal that was commercially viable. The first Stackflo installation took place in Adelaide and today there are 7 systems installed throughout Australasia.

Stackflo’s premises at 369 Church St, Onehunga have been in use since the 1970s and the majority of the team of technical, production and sales staff have been together since 1989. Across these 25 years they have placed high value on innovation and creativity. Add to this their ability to develop and commercialise their ideas, and together they’ve built a story of success in automation.